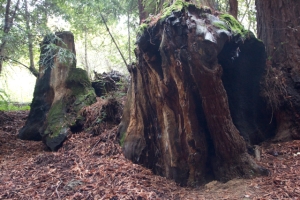 this rough-barked sequoia stump, sitting in majesty
in its coastal home, victim of wildfire, burned down
to its gnarly roots, its nicks, holes and char, eons
of scars, life seemingly cut off, goddess snake alive
inside the concentric circles, the smell of wood and
scorch of fire, at the verge of our infinity, in its truth ~

haunted by the geometry of limbs, the calculus of green,
the algebraic eloquence of a world within a world  ~

it sings to itself in the marrow of our bones

In preparation for The BeZine 100,000 Poets (and Friends) for Change

This poem was originally written in 2014 for Wilderness Week. There were then and are now a number of fires raging in the western United States. Wildfires are a natural occurrence but since the 1980s they’ve been increasing due to human-caused climate change. According to the Union of Concerned Scientists . . .

Wildfires in the western United States have been . . . occurring nearly four times more often, burning more than six times the land area, and lasting almost five times as long (comparisons are between 1970-1986 and 1986-2003) ….. many of the areas that have seen these increases—such as Yosemite National Park and the Northern Rockies—are protected from or relatively unaffected by human land-use and behaviors. This suggests that climate change is a major factor driving the increase in wildfires.” MORE

We tend to look at these fires in terms of the expense incurred fighting them and the cost of lives, homes, habitat, wild life and so forth. However, there’s one consideration we may tend to forget: Nature teaches us, comforts us, feeds us and is the ebb and flow of our spiritual and physical lives. The loss – the environmental injustice – is profound on more than a material level. This is what the smell of wood, the scorch of fire seeks to illustrate. “Nature” is who we are. Nature is us.

Write a poem or creative nonfiction piece on what the natural environment means to you and perhaps the sense of loss you feel as you note plants, animals, insects and wilderness that you’ve seen damaged or destroyed by climate, industry, overpopulation and whatever else has effected the area in which you live.

© 2014, poem, Jamie Dedes (The Poet by Day), All rights reserved; Photo credit ~Bay Nature.org: “The Bay Nature Institute, based in Berkeley, California, is dedicated to educating the people of the San Francisco Bay Area about, and celebrating the beauty of, the surrounding natural world. We do so with the aim of inspiring residents to explore and preserve the diverse and unique natural heritage of the region, and of nurturing productive relationships among the many organizations and individuals working towards these same goals.” Read more HERE.

You are invited to join The Bardo Group Beguines at The BeZine blog on Saturday, September 24 for 100,000 Poets (and friends) for Change.  Below is a list of more features to provide you with information. We hope you’ll join us.

I curate The Poet by Day, and am a freelance writer, poet, content editor, and blogger. The Poet by Day [jamiededes.com] is an info hub for writers meant to encourage good but lesser-known poets, women and minority poets, outsider artists, and artists just finding their voices in maturity. The Poet by Day is dedicated to supporting freedom of artistic expression and human rights. Email thepoetbyday@gmail.com for permissions, commissions, or assignments. I am also the founding editor of "The BeZine" and manage all associated actives there. Email: bardogroup@gmail.com View All Posts

3 thoughts on “the smell of wood, the scorch of fire … and a writing prompt to help you prepare for 100TPC”