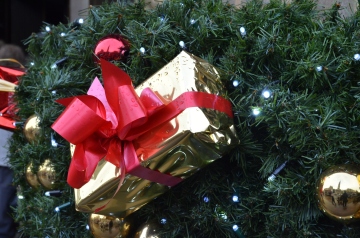 My kids had a small festivity at kindergarten. They sang songs, and recited poems, and then Santa Claus came and gave gifts to all of them…overall it was nice. And obviously crowded, because for each of the kids in the festivity, there was at least one adult in the public in front of them, admiring them and cheering them and…doing whatever adults do when attending their children’s festivities.

After we left, when we got back home and the kids opened their presents and began to play, I couldn’t help thinking about the children of this world whose Christmas gift may not be big enough as to contain more than some fruit, let alone toys or other things. And that’s sad, because, above all, Christmas is a time of giving. Not because of Santa Claus, but because of its original meanings. Go beyond the birth of Christ, which was a gift in itself, given to the world (yes, I know that according to some new calculations Christ was actually born in spring, but it’s the symbol I’m talking about here), go back to those times of yore, when the only thing celebrated during this period of the year was the winter solstice – the joy that, after slowly shortening its gift of daily light for six months, the sun was beginning to turn the wheel around and days were starting to “grow” again. This was the gift people got back then – light. More light. Which, come to think about it, is such an awesome and priceless gift!

Anyway, the point of this pondering was that of reminding you all that, even if I don’t believe that giving should be the appanage of Christmas time alone but a way of life, I do believe that this is a good time to remember about all the gifts that we have ever been given, no matter by whom, and to try and imagine how our lives would have been had we not received those. Starting with the gift of life from our parents, and to the gift of blessings from our children.

And if you can, if you have the means, help those in need by filling their Christmas time with a little more light. You don’t have to give huge gifts – the simple fact that someone thought about them and gave them anything at all will be more than what they would expect. And their joy when receiving your present will be a priceless gift you give yourselves.

The photo attached was taken from http://morguefile.com.

LILIANA NEGOI  (Endless Journey and in Romanian curcubee în alb şi negru) ~ is a member of our core team on Into the Bardo. She is the author of three published volumes of poetry in English, which is not her mother tongue but one that she came to love especially because of writing: Sands and Shadows, Footsteps on the San – tanka collection and The Hidden Well.  The last one can also be heard in audio version, read by the author herself on her SoundCloud site HERE.  Many of her creations, both poetry and prose, have been published in various literary magazines.