Is it possible to develop a sustainable fashion industry? I think it is. But it will take some radical, dare I say revolutionary, change to make this happen.

As one, who is about as far removed from being ‘fashion conscious’ as it is possible to be, I may not be the best judge. With the possibility of my having little or no credibility in the fashion business, I’m fully prepared to be shot down in flames.

First source and evidence for the prosecution of the fashion industry as it is now, or was before the lockdown, is an article by ‘Fashion Revolution’, which immediately raises my (well their) credibility by a lot of points, I would say.

It has been apparent for a long time that the fashion industry has gone too far. Its plundering of every last drop of blood from the clothes ‘factories’ in Bangladesh and elsewhere in the Third World, has not gone unnoticed in recent years, at least amongst those who care. The conditions of some if not all of these factories have been brought to the mainstream news, by an increased awareness of the appalling conditions in which the slave labour employed by ruthless middle men, who are in turn engaged by the equally ruthless procurement policies of the big name retailers in the West.

We cannot forget the particularly disastrous fire that ripped through one such Bangladeshi clothing factory, just outside the capitol Dhaka, killing 117 people in 2012. A year later, the eight storey Rana Plaza building collapsed in the Savar Upazila district of Dhaka, the final death toll was an utterly horrifying 1,134 people. A further 2,500 people were rescued from the building but injured, and heaven knows how many of those were unable to work again.

It turns out that the bank and shops on the ground floor of the Rana Plaza had immediately been shut when cracks appeared the day before the disaster. The owners ignored the warnings and the clothing workers were ordered to return to work. The building collapsed the following morning.

This is a price being paid by those desperate to earn a living in a country with no welfare or other benefits enjoyed by us in the West; all in aid of making clothes for a Western clientele, who have become addicted to the utterly futile pursuit of the latest ‘affordable’ fashions. This so called fashion is promoted by clever marketing and advertising that woos susceptible minds into believing their lives will be forever enhanced. These minds are being fed a compelling mix of subliminal messages by latter day drug peddlers, who weave a storyline that represents a kind of commercial pornography; of enhancement of desirability; competitive sexual attraction.

As if this weren’t bad enough, we have to add to the damning list, the effects on the environment of the unchecked spillages of dies and other chemicals into the rivers that snake their way through huge townships in Indonesia and many parts of the Third World,  where cloth-making factories respond to an insatiable Western demand. The fashion industry as a whole is one of the most polluting industries in the World and has an annual carbon footprint of 3.3 billion tonnes of CO2. 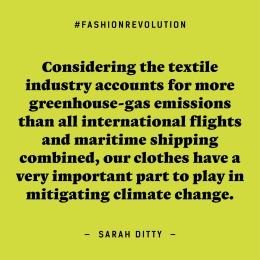 Elsewhere, even in the Western World, as retailers cancel orders and payments for existing or completed orders are not made, there is suffering from those who are becoming unemployed, who are not able to get unemployment benefit as a result of the fact that, because of the ruthlessly cut-throat nature of the supply chain, they may not be engaged to work under the control of regular registered employment contracts.

In the meantime, major retailers, like many corporates, claim hardship under the exigencies of COVID-19 and stick out their hands for government bailouts, to which they may in principal be entitled – e.g. furlough payments – whilst they withhold payments to their supply chain, which in turn kicks back up the line to the little man, who cannot compete with the shear buying power of their ultimate corporate customers. The whole system has become corrupted beyond the bounds of acceptable trading standards.

The ‘need’ for new fashion is promoted by a variety of vested interests, not least of which are the major retailers, but included in which are countless smaller businesses. The major fashion houses cannot stand blameless, because, whilst they may not wish for their exclusive and expensive couture to be copied and sold cheaply, they cannot help themselves from pandering to their affluent middle class clientele, envy of whom is readily created by the seductive imagery of the advertisers. I suspect the fashion houses will indirectly benefit from the increasing frequency of the ‘fashion cycle’ from seasons to months … even to as little as one week.

This shortening fashion cycle has been enabled by prices that are so cheap and materials – that wear out too fast – sewn together by ‘sweat shop’ labour that makes it impossible economically to make your own clothes at anywhere near the same cost as you can buy  them in some shops (usually the ones with the lowest ethical standards). My wife, who used to enjoy making her own things, including clothes and curtains, discovered this many years ago.

Whilst Extinction Rebellion continue to highlight the bad side of the fashion industry, with some graphic demonstrations, particularly at London Fashion Week in September of last year, Fashion Revolution have a mission that will encourage a mindset to ‘make do and mend’, to recycle and redesign, to up-cycle and, dare I suggest, perhaps even create the opportunity for a new industry that makes new from old. Their agenda is to make fashion sustainable and ethical. Their objective is to make fashions last longer, so the industry is sustainable and those who do love to buy a fashionable new outfit can continue to do so, without fear of playing a part in  raping the environment and without a threat to the lives of the poor and vulnerable in society, enabling them to secure sustainable jobs, in all parts of the World.

To make change happen, those marketing managers, advertising executives and their corporate employers must begin to adopt a real ethical stance, one that does not simply window dress and pay lip service to a ‘green’ and ‘sustainable’ future, but one that is genuinely revolutionary. This cannot be made to happen without us, the customers. We must stop allowing ourselves to be driven by desires, created by the fashion industry’s powerful imagery, inducing a dependency on the drug of fashion, under the control of those unscrupulous dope peddlers. Crucially, as with so many consumer goods and even our food, we have to be prepared to pay more. Greed by the few, must be driven out of the supply chain by the many to enable far greater equity, otherwise we can only consider ourselves to be the beneficiaries of a modern slave trade.

It is we, the masses, who must be the drivers of change, the driving force behind a revolution. We must be the change we want to see.

“Life is short and art long, the crisis fleeting, experience penniless and decision difficult” ~ Hippocrates. As a young man, John enjoyed being fit and sporting. It was then as much his recreational therapy as a cappella harmony singing, music, walking in the hills and writing is now. Playing Rugby Union for over twenty years, encouraged in the early days by a school that was run on the same lines as Gordonstoun, giving shape and discipline to a sometimes precarious early life. This fitness was enhanced by working part time jobs in farming, as a leather factory packer and security guard, but probably not helped, for a short time, by selling ice cream! His professional working life was spent as a Metallurgical Engineer, Marketing Manager, Export Sales Manager, Implementation Manager and Managing Director of his own company. Thirty five years spent, apparently in a creative desert, raising a family, pursuing a career and helping to pay the bills, probably enriched his experience, because his renaissance, on retirement, realised a hidden creative talent as a writer of prose and poetry. He also enjoys music, with a piano and a forty-nine year old Yamaha FG140 acoustic guitar. He sings bass in three a cappella harmony groups: as a founding member of a mixed voice chamber choir, Fox Valley Voices and a mixed barbershop quartet. He is also a member of one of the top barbershop choruses in the UK, Hallmark of Harmony (the Sheffield Barbershop Harmony Club), who, for the eighth time in 40 years, became UK Champions in 2019. He is also a would be (once upon a time or 'has been') photographer with drawers full of his own history, and an occasional, but lapsed 'film' maker. In his other life, he doubles as a Husband, Father, Grandfather, Brother, Uncle, Cousin, Friend and Family man. What he writes is sometimes autobiographical, often political, sometimes dark and frequently pins his colours to the mast of climate change and how humans are trashing the Earth. In 2013, he published an anthology of the poetry (including his own) of an international group of poets, who met on Twitter in 2011. He produced, edited and steered the product of this work, "Petrichor Rising", to publication by Aquillrelle. His sort of strapline sort of reads: “ iWrite iSing iDance iVolunteer ” View All Posts