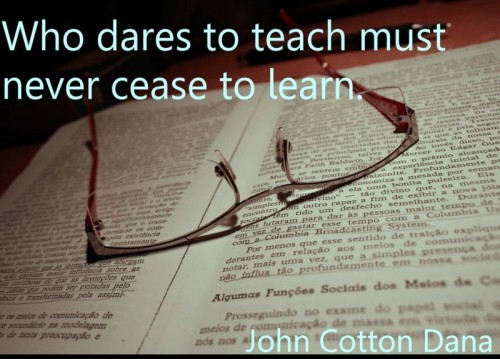 I was installing something on my computer this morning and I smiled when I remembered that, prior to meeting my husband, computers were for me something that I barely touched, using the one in my house back then only to write some paper work for university from time to time (yeah, that was a different age, we used handwriting more often 😛 – I still use it probably more than half of you, dear readers, although I discovered also that Microsoft Office is quite a friendly application :).

Anyway, what I’m trying to say is that after meeting my husband I “evolved” up to the point where I’m not only capable to use the current system, but I’m able to assemble one from pieces, install the software (starting with the OS) and whatever other programs I need, and do many other things with it. In other words, “I learned”. Which is something that we ALL do, all our lives, voluntarily or involuntarily – we learn in order to adapt to the circumstances presented to us by life. Some say that we are able to learn even prior to being born from our mothers’ wombs – I don’t know about that, but for sure we are able to learn starting with the moment when we are born, and we continue to learn until the day we die.

The reasons why we learn are obvious. The reasons why we don’t learn can also be obvious, but neither ones nor the others make my topic for today. Instead I am going to mention a discussion that I had with a friend only a couple of days ago, in which he (my friend), who, coincidentally, is going to be a professor, was telling me that if I’m not able to teach someone a certain thing, maybe it’s because of the method that I’m applying.

I was tempted to reject the idea, for many reasons (pride among them), but fortunately for me I was smart enough in that moment to simply shut up, to listen to what he was saying and to chew on his words later that night. And then I realized that he was pretty much telling me what I always stated – that prior to teach someone WHAT to learn, you have to teach them HOW to learn. Ignacio Estrada said that “If a child can’t learn the way WE teach, maybe we should teach the way THEY learn”. The final goal is not for our own teaching to impose itself unto the mind of a being, but for that being to learn something from our teaching.

What my friend may not have realized at that point was the lesson that I myself had to learn that evening – and that is that the hardest to learn is when you think you already know what you’re learning. But as John Cotton Dana said, “He who dares to teach must never cease to learn”. And I myself feel lucky to have remembered such a beautiful lesson of life – and above all, lucky to have friends to teach it to me again :). Namaste!

The image used was taken from http://quotespictures.com/who-dares-to-teach-must-never-cease-to-learn-education-quote/

LILIANA NEGOI  (Endless Journey and in Romanian curcubee în alb şi negru) ~ is a member of our core team on Into the Bardo. She is the author of three published volumes of poetry in English, which is not her mother tongue but one that she came to love especially because of writing: Sands and Shadows, Footsteps on the San – tanka collection and The Hidden Well.  The last one can also be heard in audio version, read by the author herself on her SoundCloud site HERE.  Many of her creations, both poetry and prose, have been published in various literary magazines.

4 thoughts on “On learning and remembering”