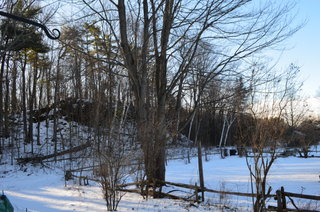 The weather has turned frigid; this follows last week’s record shattering warmth. It has been an up-and-down sort of winter, which is, increasingly and alarmingly, the norm.

I grew up in a farming community on the plains of the Midwest. We spent a lot of time outside, and learned early to keep an eye on the sky. After all, blizzards, ice storms, and tornadoes were the norm, and each was dangerous as well as exhilarating. By the time I  reached eighth grade I was a devout student of climate science and meteorology.

In spite of my love of science, during my undergraduate studies I was lured into becoming an art major. This was a surprising turn, as I had imagined myself studying ecology. Sadly, both the ecology program at the university was less than engaging. The art department was vibrant, as was the religion department, and I spent my undergraduate years firmly settled in those disciplines. I also took literature, writing, and theatre courses, much to the dismay of the art department faculty who firmly believed visual artists should draw rather than write.

My first turn in graduate school was in visual arts, although I spend a good deal of that year in the microbiology and electronic music labs. While the art faculty could not fathom what I was doing, they proved surprisingly supportive.

After a few years in the work world, I found myself studying cross-cultural approaches to counseling, and deeply engaged in learning from Indigenous teachers from many traditions. Following several years working as a clinician in both inpatient and outpatient settings, I returned to school to study environmental studies. Once again I found myself at the nexus of several disciples, including ecology, anthropology, and psychology. It was a heady and hearty time! I went on to teach art, ecology, anthropology, and psychology, often interwoven, at a small college for over thirty years.

Now we seem to have entered a time of gathering darkness, an era in which the arts, ecology, climate science, and cross-cultural studies are viewed with suspicion, and, too often, outright hostility. Perhaps most distressing is is the realization that Native values, culture, and lands are again under intense attack.  I guess we should hardly be surprised at the hostility shown these realms of knowledge and experience; after all, each is remarkably subversive to any agenda that would produce normative hierarchies and simplify the world, and that gives preference to ideas about cultural and racial superiority.

Lately, I find myself struggling to address the attacks on these systems of knowledge , and ways of living, I treasure. I  imagine things will only get worse before they get better, even as I hold out hope that they will indeed improve. For now, I do my best, although that is not enough to stop the darkness from growing. I try to keep in mind the words of a much beloved teacher, “The world is as it is, do only what you can.” Still, I would that I could do more.

I curate The Poet by Day, and am a freelance writer, poet, content editor, and blogger. The Poet by Day [jamiededes.com] is an info hub for writers meant to encourage good but lesser-known poets, women and minority poets, outsider artists, and artists just finding their voices in maturity. The Poet by Day is dedicated to supporting freedom of artistic expression and human rights. Email thepoetbyday@gmail.com for permissions, commissions, or assignments. I am also the founding editor of "The BeZine" and manage all associated activities. Email: bardogroup@gmail.com View All Posts