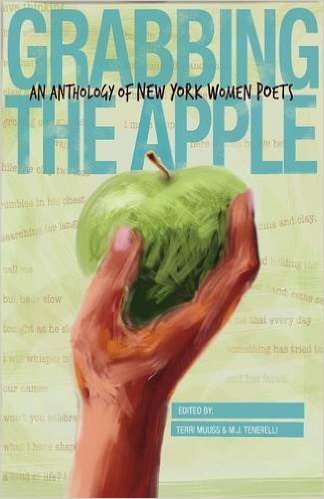 Thanks to poet, writer and anthologist, M. J. Tenerelli, for sharing this story with us today.

Several years ago I did a show for the Northport Arts Coalition highlighting the work of well established women poets. I thought at that time that pulling together a collection of passionate, local women’s voices in a book of poetry would be a wonderful thing to do. There were so many talented women I knew on the New York circuit, giving profoundly moving performances, sharing really fine work. Two years ago my friend and co-editor, Terri Muuss, suggested that we get together and produce what became Grabbing the Apple, and anthology of New York women poets. And so a two-year project began.

The idea behind the book was to share what we believed was the unique voice of the New York woman, informed by place as well as a particular confidence, savvy, and passion. Terri and I wanted the book to serve as a conduit for these women, allowing them to define themselves as opposed to the traditional definitions existing in male-created literature, including the bible. Eve from Eve’s perspective.

First we needed a title. We wanted something that reflected the concept of women defining themselves. We turned to the original story of creation in the bible, where the mother of us all begins the downfall of man by plucking an apple from a tree. With Grabbing the Apple, we believed we had a title that turned that creation story upside down. Yes, the first woman, embraced wisdom, and that did not make her a monster but rather a heroine and a role model. The poets in the book define themselves and the lives and concerns of women, forcefully and without shame. We felt the anthology’s title embodied that. And of course “Apple” brings to mind New York.

Call for Submissions: We used social media, college websites and word of mouth to solicit submissions. We emailed the women poets we personally knew. The amount of work that poured in amazed us. I think the concept of the book really spoke to these writers, and they wanted to be heard. We culled 47 pieces from hundreds of submissions. It wasn’t easy. With the help of poet Matt Pasca, Terri’s husband, we instituted a blind process. Matt oversaw the email submission box, and printed out the poems for us, minus the writers’ names. Terri and I both had complete copies of the submissions to read through and consider. I don’t think we understood at the time just how long it would take to come up with a book we were satisfied with–to do right by the poets and the idea behind the book.

Reading and Selecting: I spent a lot of time with the work. As a mother with a full-time job, I spent many lunch hours in my car, and on the couch after work, reading poetry. It was far from a chore. The work energized me, moved me, and surprised me again and again. I started to feel honored to be stewarding these pieces into publication. It was often hard to choose what to accept and what to leave behind. Terri was also reading and considering. We each had a form to work with, where we gave each poem, identified only by number, a yes, no, or maybe. Then we would meet to compare our opinions.

In pizza restaurants, cafes, and often in Terri’s spacious living room, we would have “Apple” meetings. Often we agreed on what needed to go into the book. But not always. Sometimes one or the other of us would make a strong case for a poem we were passionate about. There were negotiations. It was never contentious. We respect each other as writers and editors, and are good friends. So we really listened to what the other had to say. It worked. We came up with a manuscript we could both stand behind. When it came to our own work, I picked a poem of Terri’s that I thought was perfect for the book, and Terri chose a piece that I had done. The next step was to create an order for the poems.

Terri suggested dividing the book into three parts, “Eden,” “The Fall,” and “After the Garden.” I loved the idea, but worried the poems we had wouldn’t lend themselves to the categories. It turned out to be needless worry. Whether loosely or specifically, each poem fits under one of the headings. I remember one night crawling around on Terri’s living room floor with the work spread out in front of us, moving poems around like puzzle pieces into each of the three sections. Again, there was a lot of consideration and some negotiating, but in the end we had groupings that made us both happy. We high fived each other and then celebrated with brownies! We had our poems and we had an order. We weren’t quite done though.

Finalizing and Publishing: We were our own proofreaders. There were a hundred plus pages to pour over. We wanted to get everything right. This took time, and in the end there were a few mistakes but we did our best. We proofed alone and together. We sent the manuscript to the publisher, corrected galleys, and up to the day before publication were still proofing! While we had input into the layout and design, it was the artist Janine DiNatale who created and did the layout for the front and back covers, and the publisher, J.B. Stillwater, who provided the beautiful finished book. I remember cradling the first copy sent to us and feeling like a proud mother. The final step was to get the collection out into the world.

Our initial book launch was at Cyrus Chai, in Bay Shore, New York. So many of the poets in the book came to read. For me, this was the defining moment. The poems I’d been living with for so long came to life. The electricity, love, and sisterhood in the room were palpable. The words sang. We’d accomplished what we set out to do, with more launches planned throughout the Summer.

Grabbing the Apple is on Amazon where you can have a peek inside and sample a poem or two.