“When Bat came to the animals’ party, Zebra said, ‘You’re not an animal. You have wings. Go to the birds’ party!’  Bat went, but there it was the same. Eagle told Bat, ‘You’re not a bird. You’ve got fur and ears and teeth.’  Bat slunk away.  Perched on a branch, as he cried, he lost the strength to hold himself upright.  He flipped over to hang upside down, his tears dripping down to the ground.”

When the story was over, everyone in the circle applauded Allison.“It’s sad,” said the first listener. “If it were a kid’s book, the bats would get together and have their own party. But Bat doesn’t get a happy ending.”

“That’s reality. He didn’t choose to be this way and he’s rejected for it anyway.”“

For me, this question of categorizing Bat is really important. It reminds me of going to the bathroom and choosing ‘Men’ or ‘Women.’ Or being bi and having everyone want to label you as either gay or straight. So begin our meetings at Under the Rainbow…

As the parent of gay children, Naomi Baltuck knew that few programs or public gathering places existed for LGBTQ in Edmonds, just north of Seattle.  In a climate of increasing intolerance, she wanted to use storytelling to heal, inspire, and strengthen the community.  But that connection had to be built on trust, and that trust had to be earned. Under the auspices of the Edmonds Neighborhood Action Coalition, she partnered with a local queer-friendly game pub to launch a monthly Family Gayme Time, which drew a good crowd. Once that was established, she asked the Edmonds Library to host a monthly storytelling series called Under the Rainbow, for LGBTQ and Allies. When they agreed, she contacted the high school’s Rainbow Warrior advisor, and the Edmonds Diversity Commission. 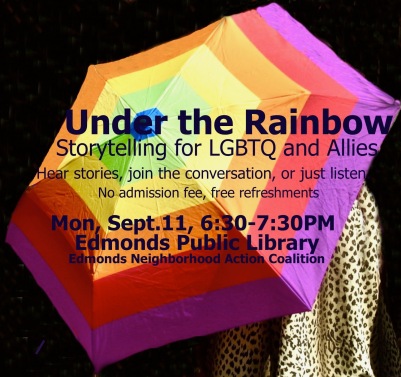 Allison Cox, social worker and author/editor of The Healing Heart books on storytelling for healthy families and communities, lent her expertise. We needed it. Under the Rainbow was built from scratch. Should there be rules? Age limits? Time limits? Language restrictions? Could we find LGBTQ storytellers willing to work gratis, since we had no budget? We put the word out, and along came Chris Spengler, a storyteller known for her humorous and uplifting personal tales. Chris jumped on board, and we had our team. Our vision wasn’t of polished performances, but to create a place for LGBTQ and Allies to share their own stories, to support each other and be supported.  Rules proved unnecessary in a place where everyone is respected.  Age limits too; we’ve had babies, elderly, and everything in between; everyone’s welcome.  Our team comes prepared to tell, to get things started. Most of our lives aren’t centered around being a lesbian or bisexual or a supporter of those who are, so we also tell stories dealing with sexism or rejection for not fitting family expectations or having to suddenly pick up and start your life over…the human condition.

The first Under the Rainbow drew only four, we three storytellers and a straight friend. We reminded ourselves that storytelling can be healing, but to a person who has been disowned for coming out, it’s emotionally risky. Eventually Gayme Timers made the leap from playtime to storytime. We got school referrals, utilized social media, and the Seattle Storytellers Guild championed the program, lending non-profit status for grant-writing.We meet at the library every Second Monday, 6:30-8PM. Refreshments are always served, because exchanges over cupcakes can be as momentous as those happening within the Story Circle. After each tale, participants are invited to share their reactions. Listeners opened up gradually.  The first time someone volunteered to tell a personal story, we were hopeful.  The next month, when a young person prepared a story ahead of time, we were elated.  Now nearly everyone shares. The gay son of a Mormon bishop, a straight elderly woman who dated a gay man in Lebanon fifty years ago.  We heard about being gay in Mongolia. Being homeless. At last month’s meeting, one coming out story led to another and another.

Tackety Boots (The Healing Heart ~ Families, edited by Allison Cox and David Albert) is a traditional Scottish tale about Sandy, who is kicked out of a party for having no story to tell, then takes an unexpected canoe trip across the river, changing gender in the process. He lives as a woman with another man and they have a child. Sandy finds the canoe one day and is shocked when it carries him back across the river and he becomes male again. Distraught, he bursts into the party and wins a bag of gold for telling the best story of the night. But Sandy could only whisper sadly, “Oh my child! Oh my man!”Allison even told the children’s classic, “Going on a Bear Hunt,” by Michael Rosen, an acknowledgement of all the times in life you “can’t go over it, can’t go under it, can’t go around it…got to go through it!” Everyone clapped in time, grinning like a kid.

Naomi chose Tatterhood, the Norwegian story of a girl born different. No matter how hard the queen tries to mold her into a princess, she defies taming and remains true to herself, but saves the day in her own way.  While traditional stories evoke conversation, Chris’s personal stories turn listeners into tellers.

The success of this program can’t be measured in numbers, but by the impact it makes on people’s lives. One participant rarely left the house, and never did so without their service dog.  Now they work an outside job, and can leave their dog at home when necessary.  Even more good things lie ahead.  We’ve just received a grant from the Pride Foundation to bring in more LGBTQ storytellers for programs and special concerts.  Writing Rainbow is a natural offshoot of Under the Rainbow.  We meet monthly at a queer-friendly Edmonds café to write, brainstorm, and meet other LGBTQ+A writers.  A Gayme Time spinoff is LGBTQ+A Dungeons and Dragons, where gaymers roleplay a crew of gay pirates, creating their own continuing adventure story.

Here, under the rainbow, we celebrate who we are.  It looks like the bats are having a party of their own after all!

2 thoughts on “Telling Tales Under the Rainbow”