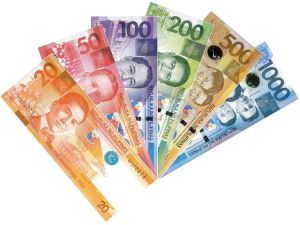 I think of her often. I only met her that once, but she brought with her a voice from God that has never left me. Her heart was the first bloom of that warm spring.

I was teaching at the diocesan seminary. It was spring, time of renewal, but mostly it brought unbearable heat in the provinces of Mindanao. So I decided to escape the oven-like classroom and had everyone bring a chair under the ancient tree that seemed to preside over the whole front yard. Just as a really lively discussion on prayer began, I noticed her walking on the road beyond the fence. She was small, with a filthy flowered dress frayed at the edges and stained just about everywhere. Her hair hadn’t met a brush in months, yet she walk with a regal calm and serenity. As she got to the open gate, she turned.

I groaned inwardly. It seemed like every day people came to beg, to ask for money, food, medicine. Sometimes with that “help keep their dignity” idea, we’d ask them to help rake leaves, but that often backfired and they got annoyed demanding what they wanted, often waving a reproaching finger in our faces, telling us that we are supposed to be like Jesus and give. And now, just as I had a wonderful discussion on prayer going, we would be once again interrupted by a beggar asking for a handout.

Then I immediately felt guilty. So as if to redeem myself from my unspoken lack of goodness, I interrupted the class discussion and told the seminarians that an older woman was coming, probably to ask for food or help, but that in spite of her being so dirty and messy, they should stand when she arrives, do “mano po”, the typical Filipino greeting of respect where you take the hand of the elder and touch it to your forehead, and call her “Tita” (Auntie). Ah, it looked like I was back to being the wise holy man I was supposed to be…but it was just me still treading water.

The woman came right up to where I stood, totally disrupting the class like I knew she would. She was even dirtier up close, mud on her face and her sandaled feet black. The ever obedient seminarians (or make that “usually obedient”) stood politely, blessed her and mumbled pleasantries calling her “tita”.

She began in Cebuano, “Father, I was walking by and saw you teaching the boys under this big shade tree. And I had this idea, so I came in.”

To myself I figured I knew the “idea”, a good place to ask for help. But she seemed so sweet, I suddenly thought of volunteering to get her something from the kitchen myself…being that holy and wise person I thought I was. Yes, yes, I would make up for all those negative thoughts about her by being of personal service!! Gee, what a guy!!

Then she dug deep into her pocket, as it was an endless cavern, and finally pulled out a kind of moldy rag and then opened it slowly, as if the British Crown Jewels were inside. There appeared an old 20 peso bill, only a little cleaner than she. She continued her story, “When I saw you there, teaching these boys about God, how to love God and be faithful…well, I thought, you know what…I want to buy them a snack. So here.” And she shyly handed me the 20 pesos, somehow not fully able to look me in the eyes.

I took the filthy bill and suddenly didn’t know what to do. This woman came to give, to share, to help, to encourage…She turned to leave, and I asked her to stay and have snacks with us. She smiled serenely, with the kind of peace that comes from knowing you live in God’s heart, and turned and left. All the boys just looked at me blankly. 20 pesos wasn’t, of course, enough to have snacks for the class. It’s about 50 cents in the US. But I decided to go to my office and get money and have the guys buy something from the little store across the way. If Auntie wanted us to have snacks, that’s exactly what we’d do. I told the guys I’d be right back…but in fact I was a little longer than expected. I had to wash my face so they wouldn’t see how hard I had been crying once I was out of sight.

I never saw her again, but she remains one of the finest teachers I’ve ever had, and a voice of God that has never been silenced. It was spring, and a part of me was reborn.

I curate The Poet by Day, and am a freelance writer, poet, content editor, and blogger. The Poet by Day [jamiededes.com] is an info hub for writers meant to encourage good but lesser-known poets, women and minority poets, outsider artists, and artists just finding their voices in maturity. The Poet by Day is dedicated to supporting freedom of artistic expression and human rights. Email thepoetbyday@gmail.com for permissions, commissions, or assignments. I am also the founding editor of "The BeZine" and manage all associated activities. Email: bardogroup@gmail.com View All Posts