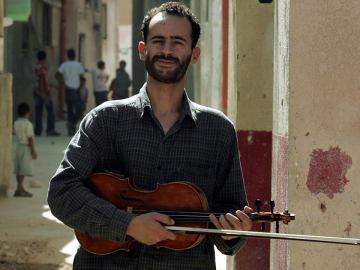 Music, the language of the soul
The cultural Intifada*…From stones to musical instruments.
The story of Ramzi Abu Radwan.

They impressed the world
And all they had in their hands were stones
They lit like lanterns, and came like messengers
From “children of the stones” Nizar Quabbani (1923-1998), Syrian poet and publisher

The first Intifada is the Palestinian uprising against the Israeli occupation that started on December 1987 in Jabalia** refugee camp and spread throughout the rest of Gaza, the West Bank and East Jerusalem. It lasted six years until the signing of Oslo Accords in 1993.

It was an unarmed, spontaneous yet exploding uprising, men with their faces covered with keffiyehs***, women and children with nothing but stones, slingshots and Molotov cocktails faced tanks and live ammunition of well-trained, heavily equipped Israeli soldiers.

One of those children, a kid wearing blue jeans and a red jacket whose picture reached the world newspapers became a legendary symbol of the Intifada, a skinny kid throwing stones at an army jeep, his eyes welled with tears, on his face a mixture of anger, fear and defiance. This kid, whose picture was reproduced in posters all over the world as an icon of the uprising, never knew that his destiny will change forever and he will become a visionary artist.

This was Ramzi Aburadwan, born in Bethlehem in 1979, he spent his childhood and first teenage days in a refugee camp in Ramallah where his family was forced to live after the Nakbah****, his best friend died on their way home from school during a military operation, he was eight when a journalist took a picture of him hurling stones and was later called “the iconic child of the Intifada”.

Ramzi was introduced to music at the age of 17, when a woman invited him to attend a course, he immediately loved it and this was the beginning of his journey with music.

After a year of study in the Edward Said National Conservatory of Music at Birzeit University, he received a scholarship to study in a Conservatoire in France; on 2005 he went back to Palestine after graduation with dreams and promises of a brighter life for children. 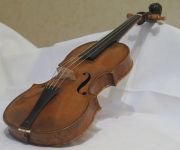 The multi-talented Aburadwan founded Al Kammanjati*****, a nonprofit organization that offers children especially from refugee camps music lessons, its aim is to keep them in touch with their cultural heritage, develop and nurture their skills and create an intimately entertaining atmosphere away from the violence and frustrations of their daily life under occupation. It gave them a precious chance to travel, play with different orchestras and meet young musicians from all over the world. Classical music is also introduced as a valuable weapon in the so called “the cultural Intifada” a peaceful way of resistance to save Palestinian culture and identity through letters, art and musical notes, something Palestinians began to understand with time because of Israeli policy of extensive judaisation of the land and fierce attempts to bury and distort Palestinian history and heritage.

He takes part in the West Eastern Divan Orchestra directed by Israeli-Argentine born conductor and pianist Daniel Barenboim who said about him:

“Aburadwan has transformed not only his life, his destiny but that of many, many, many other people, this is an extraordinary collection of children all over Palestine that have all been inspired and opened to the beauty of life”

Al Kammanjati was honoured by “prince Klaus award” from the Netherlands in 2006.

A concerto for stone and violin:

A Poem for Ramzi Abu Radwan

A portrait of the man:

IMEN BENYOUB ~ is a multilingual, multi-talented writer, poet, and artist from Guelma, Algeria. Imen currently lives in East Jerusalem. She is a frequent guest here on The Bardo Group blog and with On the Plum Tree and Plum Tree Books Facebook page as well.

2 thoughts on “Music, Language of the Soul: the second in a series from Imen Benyoub on music in the context of war and occupation”