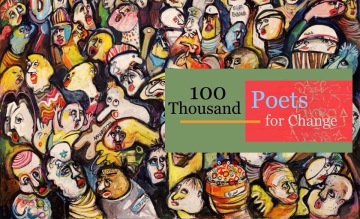 POVERTY: Discussion on Bequine Again/The Bardo Group Facebook page (let me know in the comments section if you want to be included there) has made it evident that some definition – some framework – might be needed. As we stand in solidarity and share our art, essays, poetry, music and photography on Facebook and our blogs on September 26th, I think I can safely say on behalf of the leadership at 100TPC (stated core value: peace and sustainability) and Bequine Again/The Bardo Group, publishers of The Be Zine (stated core value: nonviolence), that we are not primarily focused on spiritual malaise, ennui, or existential angst, the kind of indulgences that might characterize those of us who don’t live with bombs dropping and who so fortunately have three meals a day, clean and plentiful water, housing, health care and education. We are not primarily concerned with the psychological/spiritual insecurity that results in the need to over accumulate. These are real, important and relevant issues that do have a place in discussion. However …

… our key objective is to shed a light on the often invisible MATERIAL POVERTY that results in the death of 22,000 children each day (UNICEF) and in the nearly one billion people who entered the 21st century with no education, no reading skills. We are talking about the ever-widening distance between the haves and the have-nots even within the developed countries, with the increasing numbers of homeless, “food insecure,” and the marginalized and disaffected.

We want to shed some light on the decreasing number of the world’s richest countries v the growing number of the world’s poorest countries. In 1820 the number of poor countries to wealthy was three-to-one. In 1992 it was seventy-two to one (1999 Human Development Report of the United Nations Development Programme – see also the Center for Economic and Policy Research). What do you think are the implications for all of us in that?

In short, our concerns are primarily centered on those issues that could be mitigated and perhaps resolved by deflecting investment in war to investment in people, by responsible consumerism, responsible corporate ethic and policy, and responsible national and global human development policy. We are of the same mind as Simone Weil (The Need for Roots, 1949)when she wrote that feeding the hungry is the most basic of human obligations and that “human progress” is defined by “ a transition to a state of human society in which people will not suffer from hunger.”