Clouds gather in the sky
some are dark some light up high
here they come rumbling
wonder why they are grumbling?
raising a storm, hue and cry!

Clouds gather in the sky;

are they showing us a fire?
frowning on a sinful desire?
warning of The Heaven’s Ire?
or to cool the bonfire?
Clouds gather in the sky

I wonder if their thunder
is a song of  celestial choir?
praising Divine Moist Sapphire,
Dust we see and dust we are
yet the particles conspire
Clouds gather in the sky

to relieve us from our misery
cooling comfort we do require,
I know they come to admire
and blessing us , will soon retire
away to their ocean home entire,

Clouds gather in the sky!

they leave a message , a purifier!
be at peace and mercy
be not a crier or a liar
be like us without any fuss
a bold graceful high flyer-
Clouds gather in the sky!

in rain we sing ‘n’ shout ‘n’ play
but break the law, then face the bolt.
If stormy weather be  Gods’ Wrath?
Stormy weather was foretold—then
pray for mercy, and a cleansing bath

OH Clouds Gather in the sky!
And I don’t wonder why…

ANJUM WASIM DAR (Poetic Oceans) is one of the newest members of “The BeZine” core team.
Anjum was born in Srinagar (Indian occupied Kashmir) in 1949. Her family opted for and migrated to Pakistan after the Partition of India and she was educated in St Anne’s Presentation Convent Rawalpindi where she passed the Matriculation Examination in 1964. Anjum ji was a Graduate with Distinction in English in 1968 from the Punjab University, which ended the four years of College with many academic prizes and the All Round Best Student Cup, but she found she had to make extra efforts for the Masters Degree in English Literature/American Studies from the Punjab University of Pakistan since she was at the time also a back-to-college mom with three school-age children.
.
Her work required further studies, hence a Post Graduate Diploma in Teaching English as a Foreign Language (TEFL) from Allama Iqbal Open University Islamabad and a CPE, a proficiency certificate, from Cambridge University UK (LSE – Local Syndicate Examination – British Council) were added to  her professional qualifications.
.
Anjum ji says she has always enjoyed writing poems, articles, and anecdotes and her written work found space in local magazines and newspapers. A real breakthrough came with the Internet when a poem submitted online was selected for the Bronze Medal Award and I was nominated as Poet of Merit 2000 USA. She accepted the Challenge of NANOWRIMO 2014 and Freedom is Not a Gift, A Dialogue of Memoirs, a novel form was the result. She was a winner, completing her 50,000 word draft in one month.
.
Although a Teacher and a Teacher Trainer by Profession, she is a colored-pencil artist and also enjoys knitting and is currently trying to learn Tunisian Crochet. 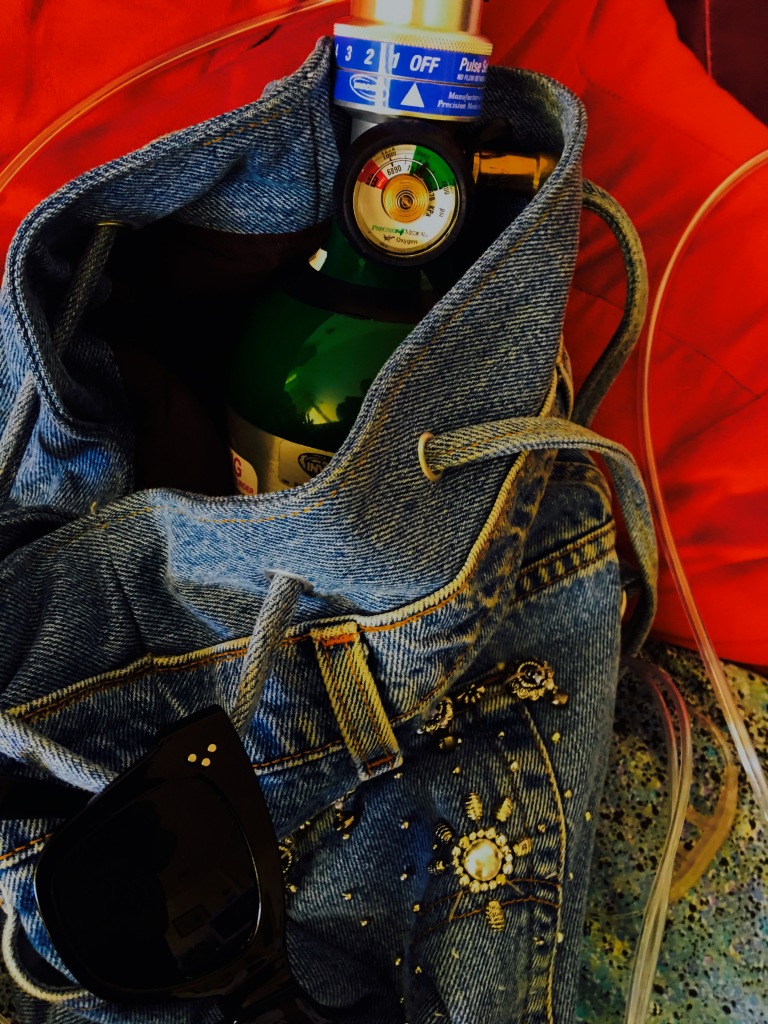 Thanks to the support of my world-class son and a stellar medical team, I’ve lived for about two decades past my original medically predicted expiration date. Every year or so I feel compelled to get on my soap box –  though the topic is off-theme for my poetry site, The Poet by Day – about lung disease, its increasing prevalence, and its debilitating effects. This post was originally written in 2016 for The Poet by Day. At that time, I needed oxygen for activity only and carried a small tank or two in a backpack as above.  As expected, over time the disease progressed and years of insufficient oxygen resulted in other complications: pulmonary hypertension and right-sided heart-failure. These are further complicated by a rare blood cancer (not curable but managed). These complications result in my being home-bound and often bed-bound for days.

I am now on high-flow oxygen (15 liters) 24/7 and am attached to two linked stationary oxygen concentrators at home and have large portable tanks for doctor visits and to get around the senior housing facility that is my home. These are moved around with specially-designed carts.  My son must come with me to doctor appointments because it takes four tanks per trip, which is too much for me to handle on my own.

At the time in our history when we started to see nature as something apart from us, when we gave up our shamanic instincts and in our hubris separated them from our growing science, when we devolved from stewardship and one-with to ownership and power-over, we set ourselves up for a world of multifaceted pain and disruption. One result in modern times is environmentally induced disease caused by xenobiotic substances that result in cancers, autoimmune disorders, and interstitial lung diseases (ILDs).

My concern here – as a powerful and noteworthy example of the impact of industrial pollutants and of wars and other violence to the earth and its inhabitants – is interstitial lung disease. I have hypersensitivity pneumonitis, an ILD that can be caused by smoking. I am a lifelong non-smoker. Everyone – EVERYONE – is at risk of ILD, smokers or not, and so are other animals. We know that in the United States and England alone, the numbers suffering from ILD are growing. No matter where  in the world we live and what we do for work, we all need to recognize and acknowledge this as part of the complex package of environmental injustices.

Our lungs are the only organs that are exposed and immediately vulnerable to industrial pollutants and inhaled chemicals, dust and other particulate matter in the air. One study tells us, “Lung cancer is the number one cause of cancer-related deaths in humans worldwide. Environmental factors play an important role in the epidemiology of these cancers.”

Consider the two hundred ILDs: These are diseases that affect the tissue and space around the air sacs (alveoli) of the lungs resulting in scaring (fibrosis). We – and other animals – can’t breath through scar tissue, which is not permeable. Hence the exchange of carbon dioxide and oxygen is inhibited. The result is a slow, horrifying and painful death by suffocation. This is mitigated for people like me who have access to healthcare, supplemental oxygen and medications like prednisone and mycophenolate mofetil and, when the time comes, palliative care and ultimately hospice. People living in poverty, in war-torn areas or working at risky occupations in third-world countries, get no such relief and no palliative care is available to them in the final stages. This is unimaginably cruel.

While the most common interstitial lung diseases are considered idiopathic, they can result from exposure to certain chemicals– including medications – and from secondhand smoke and occupational exposure to agents such as asbestos, silica, and coal dust. They may also evolve from an autoimmune reaction (hypersensitivity pneumonitis) to agents in the environment, some of which might be naturally occurring and benign for many people.

Forbes Magazine cites lung disease as one of the continuing legacies of 9/11, the result of “toxic collections of airplane fuel, asbestos, fiberglass, metal, plastic, garbage, waste materials, fecal material, human remains and who knows what else.” In reading this description, one can’t help but think also of the people of Syria and other regions of war and conflict. It is not uncommon for soldiers returning from war to report newly developed respiratory disorders.

Industry, war and conflict, greed and denial, all combine to put the very ground we live on at risk, the air we breath, and the precious functioning of our lungs … We rightly worry about and advocate for issues of deforestation, pollution, hunger, dislocation, destruction of property and other issues of environmental injustice. Not the least of our motivations, concerns and advocacy must be for the sake of our lungs. It’s a fight for the very breath that enlivens us.