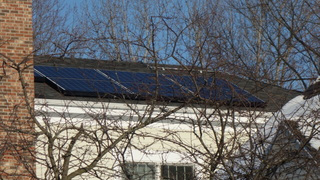 A lovely late winter morning, the light clear and vibrant on the snow and trees. The day is warm for late February; this entire week will likely be far above normal in temperature, a condition that increasingly seems normative in itself.

Early Saturday morning a crew arrived to install solar panels on our roof. In spite of our best efforts our steep driveway was dangerously icy which resulted in a confab as to whether the work could proceed. Fortunately, the temperature was rapidly rising and the application of more ice-melt soon remedied the situation. Sometime in the next few days the panels will be connected to the grid and our home will begin to generate relatively clean electricity.

Over the weekend my Facebook feed was filled with the idea of resistance. After a month of resistance I’ve decided that even more important than resistance, which remains crucial, is vision. We’ve had many years of resistance by one party or the other here in the US, resistance that has only managed to create ever more division and the very real possibility of massive physical violence. (I imagine people on all sides might agree they have experienced a prolonged period of emotional and spiritual violence.)

Also on the weekend, I got around to reading about a new project from Howlround and SpiderWebShow. Howlround wrote:

Across the much-discussed border, we are exchanging letters; Letters from Canadians and letters from Americans. CdnTimes will publish letters from Americans to hear what it’s like on the ground, now, for theatre artists working in the United States. Meanwhile, HowlRound will be publishing letters from Canadians about what’s affecting our work now. Artists from both countries share warnings, worries, strategies of resistance, generosity, and advocacy—messages of solidarity. What can we learn from each other? —Adrienne Wong and Laurel Green, co-editors at SpiderWebShow’s CdnTimes.

I’ve been wondering how I might bring diverse voices together in this difficult time, and as I read the first letters I became increasingly excited, wondering how the inspiration inherent in that project might be joined with and amplified. I’m still curious. What might those of us who are working for a more equitable, caring, responsive world share with one another that would be useful and mutually supportive? How might I provide an accessible forum for the thoughts and concerns of a diverse group of fellow travelers? What might happen were the conversation to be global!

I envision a gathering of folks in the arts, from around the world, where a conversation might be had about making art in this vexing time. I like the idea of letters as the are usually written, yet may contain photos and artwork. Letters can be thoughtful, personal, and engaging; they are by nature more than sound bites and talking points. Letters might also be created using video and integrating images, words, and sound. Hopefully the conversation would be inclusive, and those in education, the healing arts, and many other vocations would participate. If there is enough interest, I’ll put up a separate website to carry the conversation.

I invite you to share your preferred vision for the your life and the world, and how your work feeds that vision. You may leave your response here at The BeZine (I’ll read them) or on my site. My expectation is that write-ups here today would be thoughtful, personal, focused on your work, respectful of a wide range of views, and honoring the possibility of reconciliation and mutual care, far beyond North America. Please do let me know what you think of this idea, and whether you might be interested in participating in such a project. My hope is that should I go ahead with the project there would be letters from artists, and others, working in a wide range of disciplines and in many lands, and that conversations and collaborations might arise from the sharing.

Imagine a world without art and artists.

They help us see the world through different eyes.

And artisans infuse our everyday lives with beauty.

Works of art come in many disciplines.

And on many scales…

…some more grand than others.

My artist sister Constance’s painting, “The Poet”, celebrates the literary art of poetry through her visual art.

But I have great appreciation for people who would never consider themselves artists, and yet they make an art of work.

Some apply exceptional creativity to their work, like this fellow who rigged a bicycle to power a sugar cane juicer, to crank out a little work of art one cup at a time.

Some turn an ordinary business into something with a very personal touch.

In Ireland, I was moved by the gravestone of a man lovingly remembered for his gift of turning his work into an art.

…or a treasured heirloom…

…art is all around us, and everyone is an artist in his or her own way, whether practicing with a paintbrush, chisel, camera, wooden spoon, plow, or scissors.

Art is in the eye of the beholder.

Also on the tongue…

Whatever you do, wherever you go, party arty!

All images and words c2014Naomi Baltuck.

NAOMI BALTUCK ~ is a Contributing Editor and Resident Storyteller here

at Bardo. She is a world-traveler and an award-winning writer, photographer, and story-teller whose works of fiction and nonfiction are available through Amazon HERE. Naomi presents her wonderful photo-stories – always interesting and rich with meaning and humor – at Writing Between the Lines, Life from the Writer’s POV. She also conducts workshops such as Peace Porridge (multicultural stories to promote cooperation, goodwill, and peaceful coexistence), Whispers in the Graveyard (a spellbinding array of haunting and mysterious stories), Tandem Tales, Traveling Light Around the World, and others. For more on her programs visit Naomi Baltuck.com.

Her fate was set when she fell under the spell of his kind eyes and bigger than life personality. For his part, he loved her gentle ways, the fluid dance of her hands at work, the sensual swing of her hips as she walked to the market with basket in hand. And so it happened that in 1948, with her father’s permission and her mother’s tears, they were wed in the old adobe iglesia where uncounted generations of her family had been married before her. Not many months after the wedding, she kissed her parents and siblings goodbye, took a long loving look at her village, and she followed her new husband north to los Estados Unidos de América. She was already pregnant with Clarita.

As the days and years passed, they settled into their routines. Sunday mornings were her husband’s quiet time. He stayed at home while Señora Ortega and Clarita were at Mass. In their absence he would occasionally put down his newspaper and stir his wife’s frijoles simmering fragrant with pork, a few bay leaves, onions and garlic.

Last night: their Saturday ritual, she and Clarita had sorted and then washed the dried beans in cold water and left them to soak until morning. The child – fast becoming a young woman – took the time and care to do a good job of this. El trabajo es vertud. Work is virtue, Señora Ortega encouraged. In the tradition of Señora Ortega’s own madre, la cocina was a place of teaching – about food, about life, about being a woman, about being human.

“!Ten cuidado, hija!”  Be careful, she would say as she demonstrated her almost sacramental sorting of the dry beans. It was an opportunity to teach Clarita the dichos, the proverbs, of her mother and grandmother and all the grandmothers before. “Los frijoles son nuestra fuerza.” We get our strength from los frijoles, she taught Clarita just as her own mother taught her. Certainly the beans give the strength to our bodies, but also the strength to our character.  There are lessons. “¡Aqui!”  Remove these. Remove the wrinkled, the broken, the discolored or malformed. Remove them as you should remove flaws from your character. One bad frijole will ruin the whole pot.  Taparse con la misma cobija.* … You will be judged by the company you keep. Be cautious in your choice of friends.  Even the norteamericanos have such a saying: one bad apple spoils the bunch.

“Mama,” said Clarita, rolling her eyes after her mother’s latest speech. We are North Americans.” Señora Ortega’s brow furrowed when she heard this. She was given to worry about such reactions from her daughter. What of the child’s values?  It is true after all. My daughter is American. What does this mean for her future, for our relations, and for us as la familia?

Soon Señora Ortega had to put her concerns aside. It was springtime. Easter was upon them and with it a visit from her husband’s sister with her two small children. Señora Ortega and Clarita were busy with preparations. The air in her house smelled of poblanos roasting and cookies baking. They put fresh linens on the beds in the guest rooms. They picked flowers from her garden and set them in vases around the house. She gave in and bought chocolate Easter bunnies too, the silly convention of this country, but the children loved them and looked forward to them each year.

Finally the honored guests arrived and the house was filled with the cheerful noises of los niños. The boy and girl were now old enough to learn to prepare beans and, on the eve of Easter Sunday, Señora Ortega gave Clarita the task of showing the children how to sort los frijoles for cooking.  She looked on as Clarita explained the process. “!Ten cuidado, mis primos. Aqui! Remove these. Remove the wrinkled, the broken, the discolored or malformed.  Remove them as you should remove flaws from your character. Remember one bad frijole will ruin the whole pot. Be cautious in your choice of friends. Taparse con la misma cobija. You will be judged by the company you keep. “Los frijoles son nuestra fuerza.” Los frijoles are our strength.

At some point, Señora Ortega’s husband had come to stand by her side. She realized he was watching her as intently as she watched their daughter. He put his arm around her and held her close. “You see, mi querida, she is a good girl and you are a good mother. It’s gonna be okay …” “Am I that transparent,” thought Señora Ortega, but she sighed gratefully. All will be well. My mother was right. “Los frijoles son nuestra fuerza.”

* Taparse con la misma cobija – literally: to cover yourself with the same blanket, i.e. likely the same meaning as our expression “birds of a feather.”

© 2012, short story, Jamie Dedes, All rights reserved. This story is a fabrication and not meant to depict any specific person or persons living or dead. It is, however, meant to provide a slight view of immigrant concerns and to show how in some traditions values are passed from mother to daughter. Photo credit ~ Schnobby via Wikipedia under Creative Commons Share-Alike 3.0 unported license

– JAMIE DEDES (The Poet by Day)~ I am a mother and a medically retired (disabled) elder. The graces of poetry, art, music, writing and study continue to evolve as a sources of wonder and solace, as a creative outlet, and as a part of my spiritual practice.