These were my mother’s words, written by her hand, words describing her loneliness, her longing for her new husband. What I was reading felt so private, so sacred, but it was also about me, my story, mine. I closed it quickly, feeling shame, and put it back in the box of photos my mother had handed me – the photos of my great-grandparents and grandparents and parents as children that she was going to throw away if I didn’t want them. She had incurable cancer and was cleaning out closets, or maybe her life. When I left a few days later, the box of photos was in the back of the car sans the small black journal.

Cecilia and Radney grew up in the same southeast corner of town, if we consider 17 and 18 grown up. She lived a block from the railroad where her father worked as a boiler maker’s helper in the roundhouse. This was the Polish neighborhood where she attended St. Stanislaus Catholic church with masses in Latin and Polish, and went to the Catholic school. He lived on the outskirts of town, on the few acres his father farmed, along with being an inspection supervisor at Motor Shaft. Radney played football at the public high school he attended. His family didn’t go to church, until this incident led his mother to religion at the Baptist church.

They met at the soda fountain at Johnson’s Drug Store. Cecilia worked there after she graduated from 8th grade, as high as Catholic education went for girls of her station in their town in 1940. She scooped ice cream behind the counter and Radney would stop there to have a soda on his long walk home from high school. It seems she (being a normal 17 year old girl) wanted love, and he (being a normal 16 year old boy) wanted sex. She fell in love and he got lucky. Sometime in adulthood I realized that they got married in February and I was born in August. He dropped out of high school so he could support his new family but was drafted into the army soon after I was born. We moved into to her parent’s home, then his parent’s home. 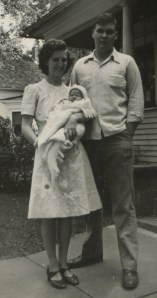 I don’t know anything about their wedding. When I would ask about her growing up years, my mother would get a strange look on her face, as if to ask why I would expect her to think about things that happened so long ago. Maybe her mind wouldn’t let her reach back into those years, maybe she thought it irrelevant. I knitted together a piece of detail from here and a piece of detail from there; not from stories they could have told, but public facts, printed on things like birth certificates and marriage licenses. Maybe that is why I longed to read what was written in that black book, to examine the personal side and analyze how it happened to me.

The family never talked about that year but it must have been a tough one. In 1943 a 17 year old Catholic girl didn’t date a 16 year old non-Catholic boy. Everyone knew Catholics were to marry Catholics. And to get pregnant and have to get married was unthinkable. Neighbors whispered and counted on their fingers. Oh, the shame that was heaped upon them. My chest tightens when I think about the conversations that took place when my grandparents were told, and when siblings found out. Did the Polish speaking parents and the English speaking parents meet to discuss options? Who planned the wedding and what was it like? Did they really love each other; did either feel trapped?

At some point I learned shame. They didn’t sit me down and teach it to me; I learned it through osmosis. Shame was so much a part of my being that I couldn’t name it until some thirty years later. People said I was a shy child, but shame can look like shyness when worn by a child. Those who know shame understand the hung head and the hiding behind trees instead of joining in the play. They didn’t know they were teaching me shame. My grandmas and aunts and cousins taught me their love as I lived among them, and my parents taught me their shame. For the first half of my life, the shame was stronger than the love.

They were good enough parents, they worked hard to provide for us and we had fun times as I was growing up. But early on when I was four and my father returned from the army and my mother became pregnant again, it tore open some wound in him. He took it out on us. If she wouldn’t have gotten pregnant, if I wouldn’t have been born, he wouldn’t have been trapped. I heard the screaming and hateful words; I felt the bruised and bloody body. He did unspeakable things and it was my fault. I learned to hang my head and hide, so no one would see my shame.

Have you noticed when we carry something, like shame, for a long time, it becomes how we think about ourselves? We are what it is. I remember when I realized my name didn’t have to be Shame. It wasn’t a light bulb going off, but a gradual reprogramming in how my neurons fire. I began to realize that I wasn’t responsible for my own conception. Everyone else knew it and I knew other people weren’t able to conceive themselves, but I had to realize it about myself. It wasn’t my fault I was conceived. It wasn’t my shame so I could come out of hiding.

My place in the world became brighter and lighter, but my relationship with my parents is still murky. I gave up the anger at being hurt and not being protected, and I had a relationship with both until they died. But something is still missing. We couldn’t talk about it so I never heard their remorse or told them I forgave them. When I was leaving after my last two visits with my dying mother, when we both knew it could be the last visit, my mother stared deep within my eyes for several minutes. I waited for her to ask what she needed to know; I wanted to tell her I forgave her for what happened. I was stuck between wanting resolution, but also fearful that the memories of the incidents were so deeply buried in her that I would be opening a Pandora’s box when she was dying and I was leaving. I hugged her and told her she had been a good mother. She said she hoped so. 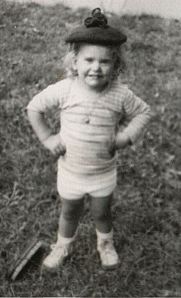 How complex our minds are, that balance adult concerns on top of childhood memories and decisions. When I thought like a child, I believed my parents loved me because they told me so. But I also learned to fear love. I remember being at Grandma’s Baptist Sunday School when I was maybe 5. We were lined up in two rows and were led in singing “Jesus loves me, this I know. For the Bible tells me so. I am weak and he is strong…” I couldn’t sing it; I was mute. If my parent could love me and hurt me, I didn’t want any part of accepting the love of the even stronger Jesus.

After my mother’s death, I asked her husband if he knew where the black diary would be. He looked hard and wasn’t able to find it. She must have burned her words. I was heartbroken because I was hoping to know her better and maybe learn that she really did want me and love me. I was hoping her words would help me in my mental exercises of sorting out childhood decisions using my adult reasoning.

I was on my own to figure it out, but that is okay. I don’t feel bitterness toward my parents because I believe they loved me as best they could. But I have also decided I don’t need to let them define if I am loveable. I know who I am and know I belong at the table.

© 2014, text and all photographs, Patricia Bailey, All rights reserved

PATRICIA BAILEY (A New Day: Living Life Almost Gracefully) ~ I retired from doing things I loved; teaching university students, directing a university major that was growing and meeting the learning needs of both traditional age and returning students, and helping people heal as a mental health therapist. In retirement I have found new and renewed activities that I love; photography, blogging, traveling, and quilting. It is important for me to have a purpose for my living, and my photography and blogging fulfill my need to touch and enrich the lives of others in a way that is healing and to help people grow and develop. Along the way I am drawing on the knowledge gained from getting a Masters in Social Work and a Ph.D. in Clinical Psychology. I am also continuing to learn about myself as I am writing and about the world as I view it through my lens. You can visit my blog at http://imissmetoo.me/

5 thoughts on “The Black Book”