Originally published in ARTEMISpoetry, Issue 12, May 2014 and posted here with the permission of the poet, Anne Stewart, and the publisher, Second Light, network of women poets 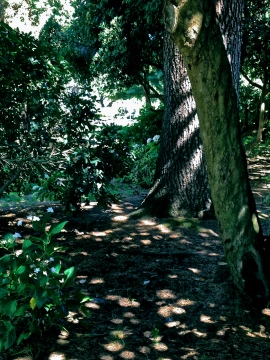 Will you be taking the dark path?
The one that doesn’t feel right?

Where mostly you meet no-one
but, once, a man with bounding dogs
who race at you, only to collapse
in snuffles and wags when you drop
to greet them, knowing a friendly hand
is the best way to test or bridge a gap.

And do you still see the huddled man,
who breaks from shadows ahead?

He stops short, fumbling with his clothes.
A man you’ll set light to if he races at you,
but he doesn’t. He’s just caught short and cowed
to find a woman knows. He nods, moves on.
You welcome the swathe of safety he cuts.

Why do you take the dark path, knowing
its silences and hiding places?

Its voices of men in the underpass
where running wouldn’t serve you,
forward or back?

But on the long way of the rat-run roads
are men in cars who screech past; men in cars
who stop and park ahead then don’t get out
and drunken men in packs, looking for more,
long after chucking out.

And who would race outdoors on hearing
nothing more than a muffled shout?

But the path is only a path. And the dark
is only time and time of year. So you take
the dark path, listening and ready,
not ready to cut your life to fit
the ‘what if?’ embrace of fear.

ANNE STEWART (poetry p f page) ~ Anne’s poetry is much published in anthologies/magazines. Her awards include the Bridport Prize and Poetry on the Lake’s Silver Wyvern (Italy, 2014). Her first collection is The Janus Hour (Oversteps Books, 2010). “ … varied, dominated by its music and a sense of quest for survival, for the light behind the clouds. Mercurial, like a Fellini film.” Katherine Gallagher. A review of the book is HERE.

Anne is the founder of poetry p f and she’s the Poetry Society’s ‘Kent North West’ Stanza Rep, a Past President (2011 – 2013) of Shortlands Poetry Circle and Administrator for Second Light Network, whose website, Second Light Live, she designed and runs. She co-edited (with Dilys Wood) the pre-launch issue, Issues 1 to 4, 8 and 11 of ARTEMISpoetry, a biannual journal devoted to women’s poetry, and contributes reviews/articles on a regular basis. She was the visiting poet at a London care-centre for two and a half years.