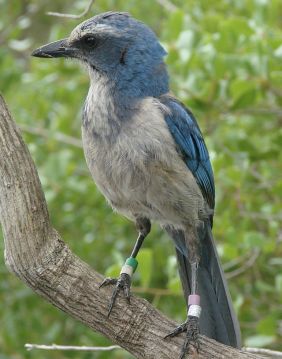 White foam rides the churning
river and a Red-Shouldered Hawk
cries out as he drifts overhead;
a meadow vole takes cover.

In an ancient, towering pine,
lies an enormous aerie, home
to a Bald Eagle couple and their
two fledglings who take turns
flapping wildly, strengthening
their wings before take-off.

A feeding herd of White-Tailed
deer wander calm through the
open forest, several fawns
leap and kick in play and sometimes
bleat for their mothers when they
wander too far.

The armor-plated armadillo can be seen
snuffling through low brush and dirt
searching for grubs, worms and beetles.
Berries, nuts and seeds are the choice
of food for the Florida Scrub Jay seen
flitting through the low, spindly oaks,
and hiding in the scrub when feeling shy.
Their lives lived in extended-family colonies
helps assure them survival even while
their habitat is being threatened.

A dirt colored and plain patterned
garter snakes through the underbrush
before coming to rest in a sunny patch
on the forest’s floor…taking time to
absorb some warmth before moving on;
a gopher turtle stirs from his day’s nap.

All the animals hear when the humans
approach and they watch with
curiosity and then fear as monstrous
machines can be heard revving their
engines preparing once again for
their encroaching.

GAYLE WALTERS ROSE (Bodhirose’s Blog) ~ has contributed to The Bardo Group blog several times since its founding in 2011. Gayle has actively blogged since 2010, writing about family life, things of the spirit, and her ashram-life experiences. In this relatively short time, her sincerity and authenticity has earned her quite a large and loyal following. Gayle is a regular participant in d’Verse Poets Pub. This poem was written in response to Victoria’s Wilderness Week writing prompt posted on Wednesday.

2 thoughts on “The Wild”